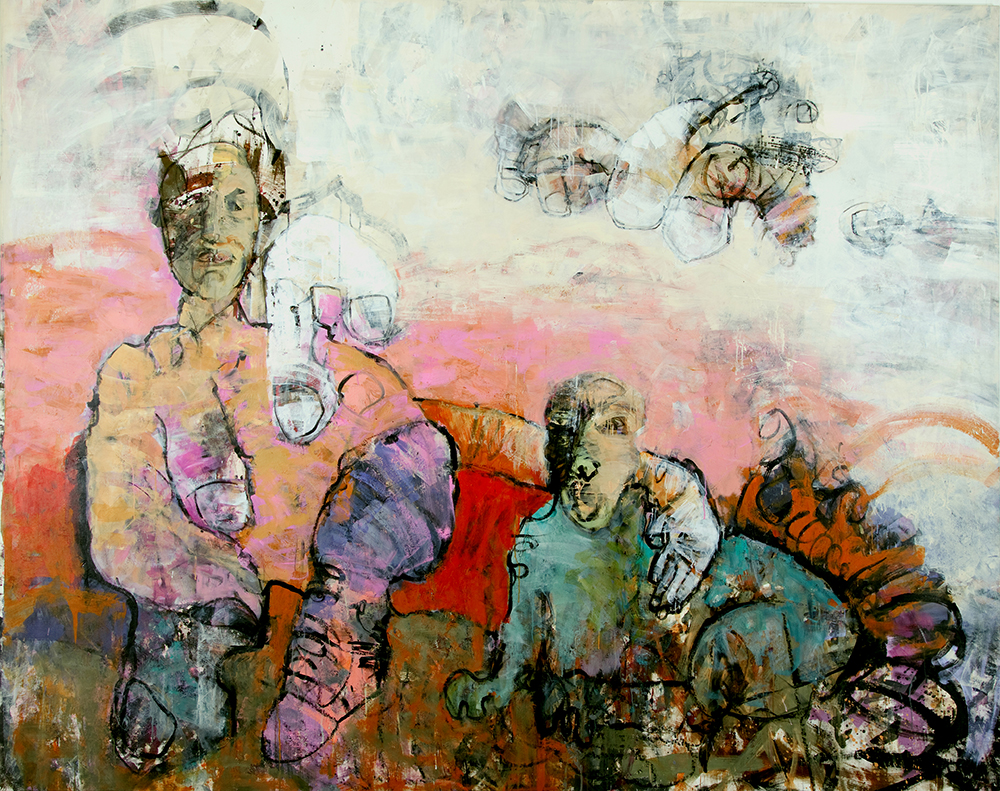 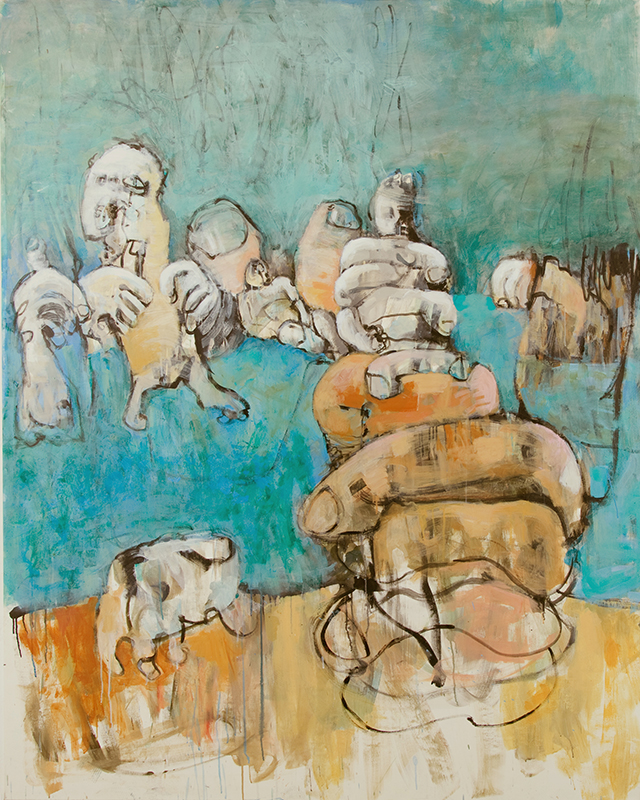 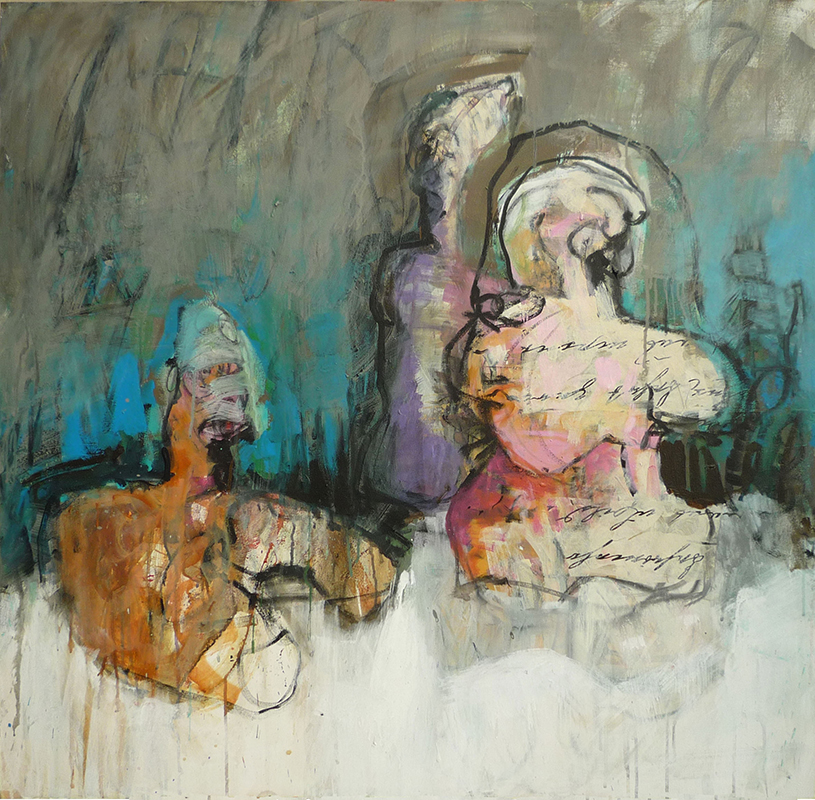 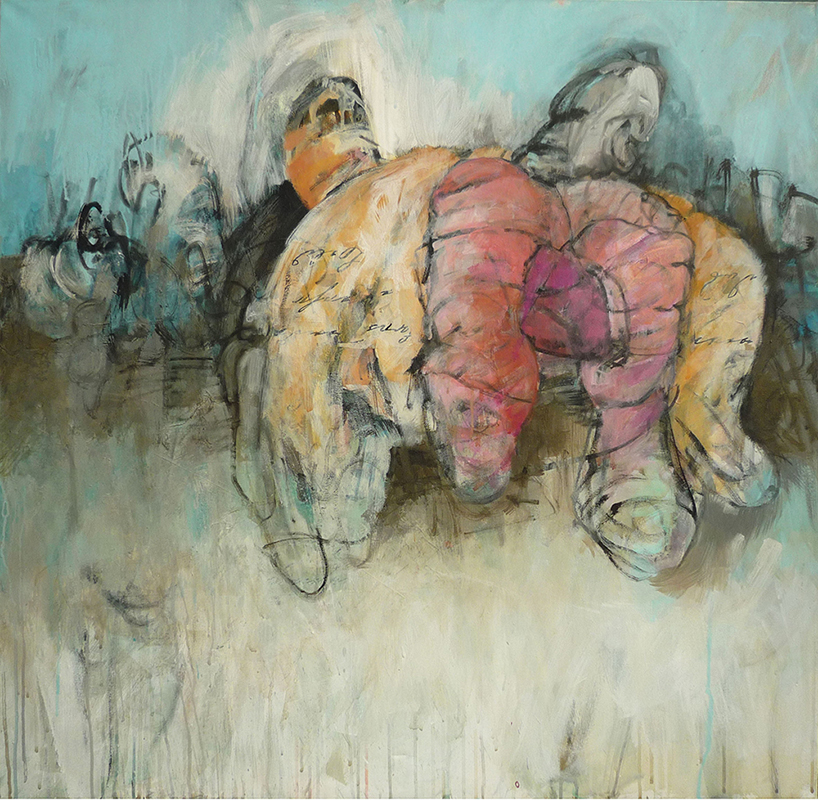 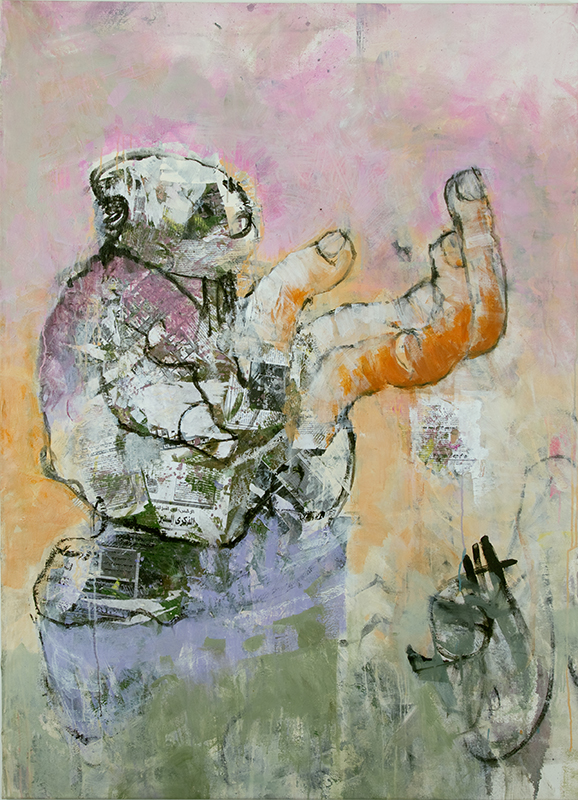 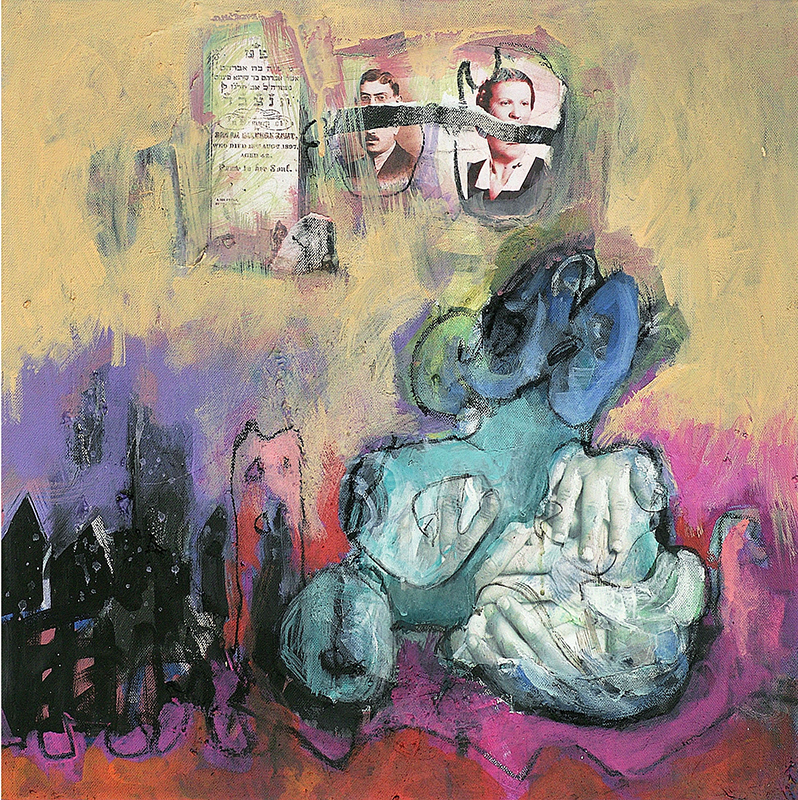 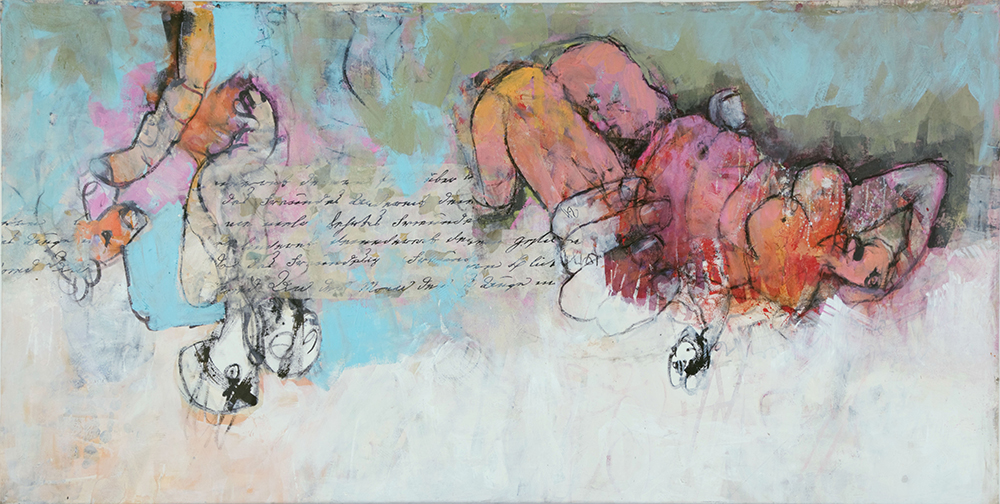 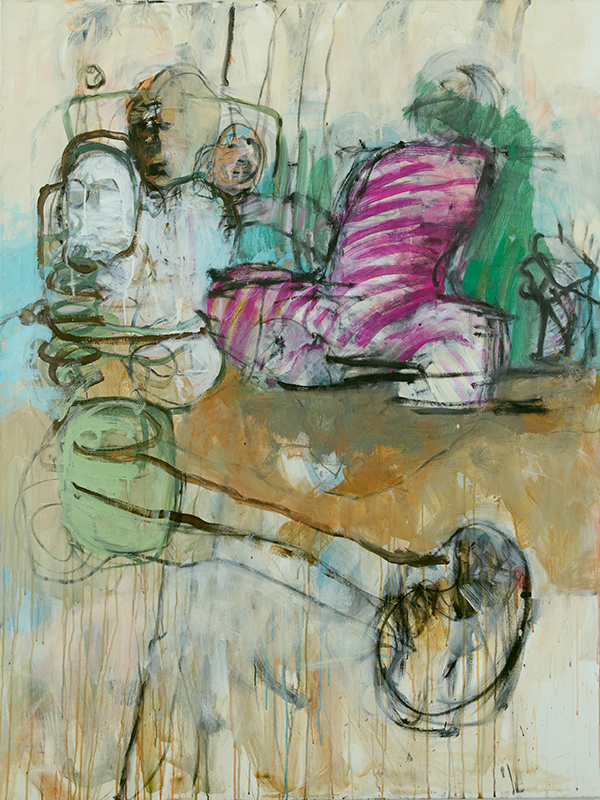 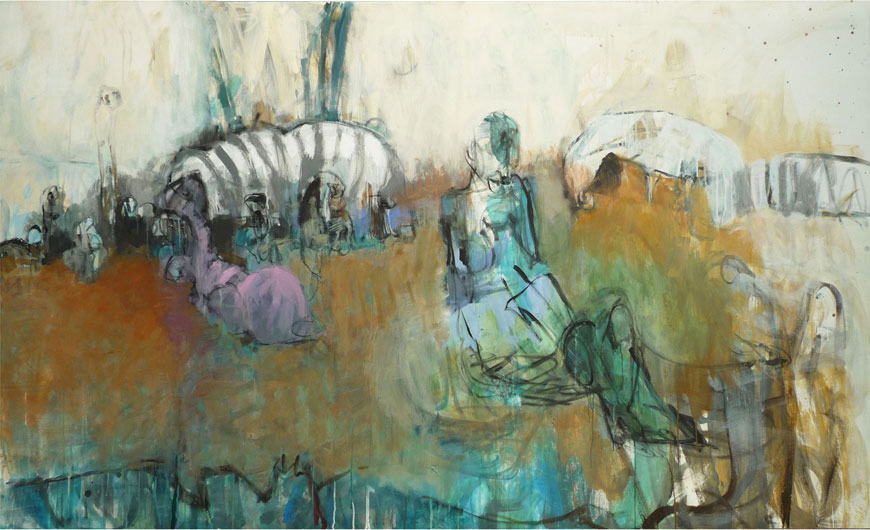 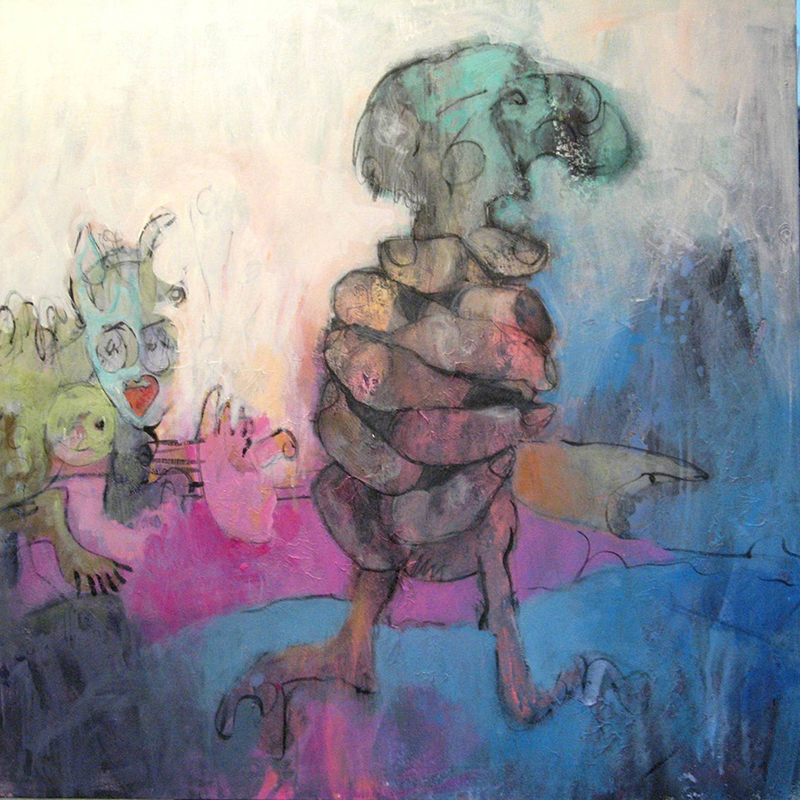 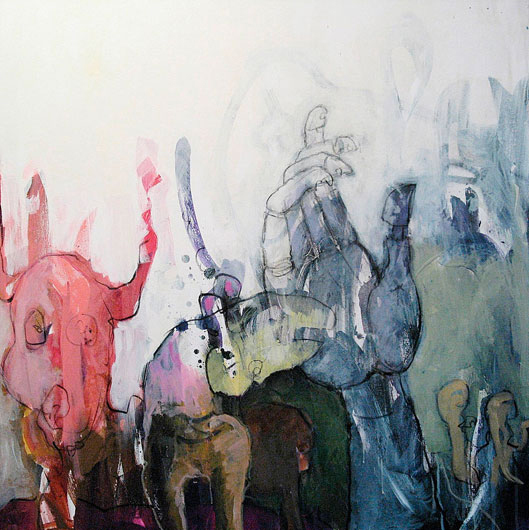 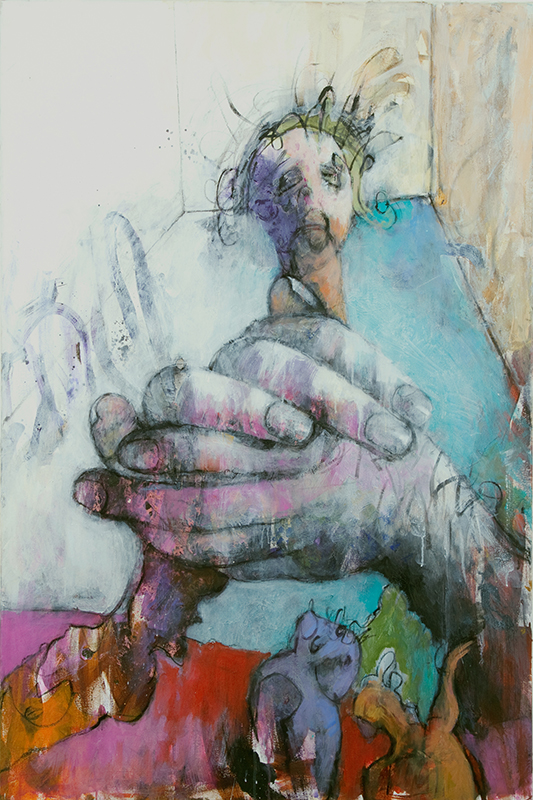 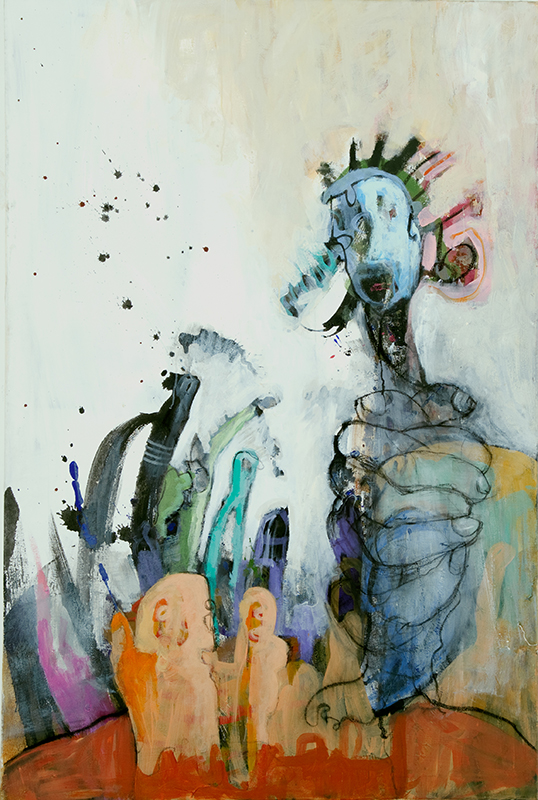 “Remembrance is a Form of Meeting.” Khalil Gibran by Melanie Klier

Without a doubt: the art of Ilana Lewitan is a highly complex, highly exciting world of enigmatic ciphers and vehicles of meaning, of sensual colour tones and colour zones. And – a clear postulate for sensible and sensitive aesthetics of perception. Located between abstraction and figuration this expressive painting – that with striking ease gives equal emphasis to freedom of gesture, graphic elements and collage – has made formal freedom and poly and multi-layered narration a style principle. Oscillating to and fro between controversial themes and historical reflection, all paintings by this Munich artist with Jewish roots are infused by the spirit of the past and present and enveloped in an “aura of timelessness and contemporaneity” (Elisabeth Brandl).

In this catalogue you therefore hold in your hands a small but beautiful collection of works tracing four years of artistic development, telling of everything and spanning an arc from the artist’s recurring painterly reminders – the very personal reception of the Holocaust by a charismatic daughter of Shoah survivors through to painting of an increasing airiness that is free in form and content. How should we understand this?
History, ever history, is of vital importance to Ilana Lewitan. The history of formal means, of her own origins, of the world. And so, too, the search for artistic clues and transformation. The writing and rewriting, the transforming and reforming of old history into new history through artistic activity. Into an elevated and different history. One that makes the hidden visible. One that gives shape to the intangible and incomprehensible. And one that in historic responsibility lends lasting pictorial dignity to Jewish destinies by means of constructed memory.

In this pictorial culture of remembrance, in this submerging in and emerging from a moving Jewish family history we encounter a leitmotif, the hands. As a symbol for the forging of identity, as an “intersection of time, place and cultural-religious affiliation,” says the artist. Thus, very much in the spirit of encounters, of meeting.
The piece Gedenken (Commemorate) dating from 2007 is an example of Ilana Lewitan’s artistic impetus and also shows in the lower third of the picture a photo collage of so distinctly “good hands”. Of hands of the artist’s family, her own painter’s hands interlocked and overlapping with those of the mother of the sisters and of the daughters, understood as a cohesive agglomeration. Above this the blue swirls of colour framed in charcoal accurately record this gesture in concentrated form. Discernible in the upper third of the picture are the black and white photographic portraits of the grandparents on a pale horizon. As torn faces separated from one another, forbidden to speak by a black banner and whom we can only partially glimpse. The great grandmother’s gravestone to the left of this, vanishing in a nebulous gesture.

Significantly, all the formal media (colour zoning, collage technique, graphic elements of the charcoal drawing as well as the free, expressive gesture and the pictorial narrative quality) have equal realms of activity and thereby seem equally weighted in our perception. Feeding from precisely this is a consistently shimmering, surreal-looking aspect of Ilana Lewitan’s painting. “Surreal” here should not be understood in the art history context but rather as a concept describing temporality. To be understood as the exploration of the past. Of monstrous stories that were unwilling or unable to tell of the monstrosity. As the intuitive eye and sense that a Jewish painter has for the surreal. To be interpreted as the compassion, as the unspoken link to each other and the unspeakable that dawns in present times in chimeric silhouette. In the Here and Now in this so very inconceivable, quite “surreal” visual reality. In the painting Welch’ ein ergreifender Gedanke (What a Gripping Thought, 2007) this pictorial idea is literally picked up on by a strange hand-like being while the piece Aneinander Verbunden (Mutually Intertwined, 2008) has contorted the hand metaphor, the fingers, into the grotesque: into fossilised lumps that do not quite reach, missing each other in an opaque frame.

It is instructive here to realise that Ilana Lewitan frequently incorporates handwriting and text excerpts into her abstract imagery. In the painting In Erwartung (In Expectation, 2008) and Halt mich fest (Hold me Tight, 2008) we see this on the one hand in a passage enunciating friendship and love that is inscribed over a figure with its back to the observer. On the other, as a link between two narrative picture halves possibly conveying intimidation. Ilana Lewitan often functionalises the palimpsest technique of repainting and rewriting as a means to multi-faceted testing of her very own artistic signature. Originally referring to the process of rewriting ancient sheets of manuscript that were written on, then scraped and wiped off to be written on afresh, the term “palimpsest” is to be understood literally. Because this successive, painterly process of creating, rejecting and further altering seems to pervade all of Ilana Lewitan’s works. Arising here is painting that, despite all the density and gravity of the heavy content, creates fresh colouring and colour spaces, fascinating fore and backgrounds, even superimpositions and, last but not least, a fine-meshed, transparent web of colour.
A “fusing of past, present and future, real trauma and visionary utopia,” as Dr. Matthias Mühling describes her paintings that appear surprisingly delicate and colourful. Because, as the artist says, “the time of mortal fear and torture and of the horror of concentration camps played out once – and this is the grotesque part about it – not in black and white but quite easily against a blue sky and picturesque sunshine.” Over again – and this is striking – city silhouettes and architecture emerge out of the enigmatic. Maybe an echo of the good old Jewish “shtetl“? Of the old past world of the fathers? Nu? (Now?, 2008), the old Jewish figure seems to ask with a suitably typical gesture, not only in the picture of the same name but also in general. Because with her painting Ilana Lewitan thinks and questions along a number of lines and answers the observer with counter questions – despite the impressiveness and clarity of her imagery.

The painter’s new pictures have in part liberated themselves from the reception of old tales of origin. Other parts of the body now gain in importance: the head or mask sections as well as arms and legs. Here charcoal drawing gains space of its own. No longer covered, structured and over-emphasised – but talking to us. Clearly and symbolically through the power of the lines in transparent, lucid colour harmony. Even the picture’s sub-divisions, in the artist’s search for ever–new arrangements and compositions, have given up their structure. They seem to gradually vanish into the uncertain (and not just in the painting Der Weg nach Oben (The Way Up, 2011)). In her recent art it would appear Ilana Lewitan has indeed offloaded the ballast. Which can be seen in her works from Entspanntes Warten (Relaxed Waiting, 2010) to Denkpause (Pause for Thought, 2011). In the painting Die Kunst der Leichtigkeit (The Art of Lightness, 2011) this is manifested in a pile of luggage in the right half of the picture. With nimble grace the artist seems to float away above it in the left half of the picture. A bon mot by Salvador Dalí reads: “One day it will have to be officially admitted that what we have christened reality is an even greater illusion than the world of dreams”. Let’s wait and see...
Dr. Melanie Klier, Munich